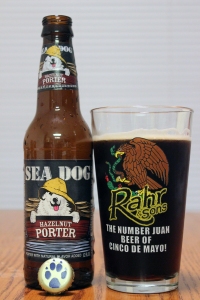 When I first started this website, one of the first posts I did was a page I called “Attack of the Fruit Beer!“, where I featured two beer reviews, being both from Sea Dog Brewing Company. The beers I had reviewed back then was the Apricot Wheat Ale and Blue Paw Blueberry Wild Blueberry. I wasn’t a huge fan of those beers, so when I picked up a bottle of Sea Dog’s Riverdriver Hazelnut Porter, it was with great hesitation, but due to my conquest of tasting as many beers as I possibly can, I marched on to the register with bottle in hand!

I used my Rahr & Sons Cinco De Mayo 1012 pint glass for this. The beer poured a dark mahogany brown, good clarity, bubbly tan head about 2 fingers wide. quickly vanished to nothing, no lacing left on glass.

The aroma was very pleasing. I had a nose full of malty caramel mixed with a nutty fragrance, and a hint of chocolate. Smelled like a good candy bar.

The taste was just liek the aroma. It had a good combination of hazelnut, caramel malt, and a subtly taste of chocolate. Not much else going on with this beer, other than a bit of bitterness. That’s OK, though, as this beer did not need anything else to help it actually taste good.

The body was a bit thick, a tad over medium bodied. The beer went down real smooth, and had a creamy mouthfeel. No real carbonation felt in this guy. The little bitterness that is present bites you a bit, but right at the front, before the creaminess takes over.

Overall, I will say that this is the best beer I have had from the Sea Dog Brewing Company. They are also responsible for Shipyard Brewing Company, and there are beers under this brand that I highly enjoy. I look forward to one day visiting these fine breweries/restaurants one day.

Metal Connection: While searching for a proper band to match up against this beer, I ran across a band called The Mushroom River Band from Sweden, so I gave them

a listen and liked a few of their songs that I heard. This song, “Bugs” being one of the main songs I really enjoyed. This song comes from Simsalabim, the band’s second, and sadly, last album before they broke up in 2004. It was released on MeteorCity Records. Their style is Stoner Rock/Metal, and they have a lot of similarities to a few good acts out there like Soundgarden, Monster Magnet, or Kyuss. There is even a good comparison to an angry James Hetfield (Metallica) in the vocal department. Their singer, “Spice” was the vocalist for a little known band called Spiritual Beggars from 1992-2001, and is currently in the Metal band, Kayser. I suggest checking them all out!