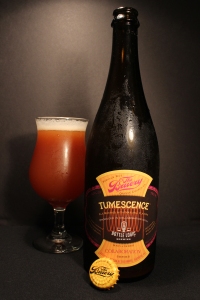 First of all, I need to give mad props to my buddy Jorge Espinoza of animebeers.com for sending me this amazing beer, as it is not available here in TX. The Bruery seems to always be pushing the envelope and experimenting a lot. They remind me of what Jester King is here in TX. Their beers are highly sought after, and beer traders all over the country are trying their hardest to get their hands on beers brewed by The Bruery. I am glad to have a good friend in Cali, that’s for sure!

They do a collaboration series, and this is just one of the entries into that series. I belive this is the first collaboration that Beer Logic has ever done. In fact, I have not heard of Beer Logic befor this beer. Let’s see how this creative beast came out.

Poured into a tulip glass, this beers appearance was strange, to say the least. The beer was very thick looking, like a consistancy of orange juice. The color was a reddish orange. The two added fruit purees did a great job on the color of this beer for sure. I guess the best description would be that it looks like carrot juice. It was topped with an off-white half inch head that had a pinkish tone to it. The head quickly faded away, leaving a small trace behind on the top of the glass, but not much lacing on the way down the glass.

The aroma of Tumescence is wild. Fresh raspberries and mango are dominant. Pretty sweet  and tropical fruit forward. Saison characters are present, like banana, clove, and peppercorns. Some lemon, apple and white grapes, as well. There is a good bread character behind all the fruit aromas. There is a small trace of funk mustiness from the Brettanomyces, but it’s not very strong.

The taste shows off the same characters as the nose, except this time there is more of the Brett shining through. Right away I pick up on the mango, and tart raspberry. The fruit blends well with other spices and ingredients showing off flavors of lemon, apple, white grapes, and farmhouse hay. Good bread-like body with banana, clove, and peppercorns mixed in. The Brettanomyces, as said shines through more in the taste than the nose on this beer. There is a good blanketing presence of sour funk mustiness that hits in the front and lasts throughout the entire swill, through to the aftertaste.

This had a medium body thickness, which I was expecting it to be a whole lot thicker, by the way. The mouthfeel was what I expected after seeing this beer. It was slick and oily, leaving a mouth coating film behind. There was mild carbonation in this beer. Not too bitter, as hops were definitely not a focus here. The finish was dry, despite the mouth coating oiliness.

Overall, I am very happy to have had this beer. Again, my buddy, Jorge is awesome for sending this beer to me. Please check out his site (animebeers.com). This beer had me at the name, seriously! Tumescence is a funny word to name a beer. A good definition of the word is the quality or state of being tumescent or swollen. Tumescence usually refers to the normal engorgement with blood (vascular congestion) of the erectile tissues, marking sexual excitation and possible readiness for sexual activity. I’m sure there are great reasons for this beer to be named this. I wish I could get into the heads of some of these brewers when they come up with their beer names. Raging happiness, I assume!

Metal Connection: OK, well I would have thought with all the medical term words that bands love to use in their titles, that I would find a song with the word tumescence in it. Well, I was wrong. I found nothing. The closest thing I found was this song, Underneath Rorulent Soil by the Belgian band, Aborted. I have been a long time fan of this band, dating back to their first full length album, “The Purity of Perversion,” which was released in 1999. This song here comes from the band’s fourth full length album, “Slaughter & Apparatus: A Methodical Overture,” released in 2007. Here are the lyrics to this song, which use the word tumescence. Enjoy!

“The abdomen distends while a microbe gambols
The wales, weals and welts leave your face a shambles
Tumescence fit to burst
A flatulent rip exhauled “