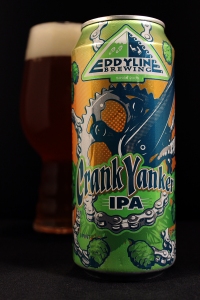 I have a friend who recently went to Colorado and brought back a bunch of different beers for the craft beer lovers such as myself. I was very happy when I saw what he brought back for us to ravage through. I picked a really good amount of beers. This is the first time I have ever heard of Eddyline Brewery, so I was definitely happy to have this beer in my collection. They seem to have a nice, impressive line-up of beers, and two locations in Colorado, a taproom and a restaurant. I would love to visit both spots if I ever get to visit that state.

I used the appropriate made for IPA’s glass for this beer. Crank Yanker appeared a hazy golden orange color topped with about an inch wide foamy head. The head remained throughout the session as a thin layer, which left very small spots of lacing down the glass.

There is a nice combination of malt and hop aromas going on with this beer. There is a good amount of fruity notes in the nose like tangerine, apricot, orange, and some lemon zest. These aromas are mild and not overpowering, though. There is a strong caramel malt smell that does seem to be a main focus, with the hops taking a backseat. There is a fair amount of biscuit bread as well in the nose.

The taste has a nice big bold caramel malt taste that hits first, that is quickly followed by a crisp citrus fruit hop taste. Just like the nose, the hop characters I am picking up on are tastes of tangerines, orange, strong apricot, and a small amount of lemon zest. There is a fair amount of a woody flavor, along with some toffee, and fresh baked biscuits. There is definitely a good mixture here with this beer.

Crank Yanker is an easy drinking beer with it’s not so heavy body, mild carbonation, slick and syrupy mouthfeel with a crisp, zesty bitterness and dry finish.

Overall, I thought this beer was definitely better than average. I enjoyed the combination of malts and hops. I know there are a lot of heavy hop heads out there who will find this beer to be sub-par due to it’s more malt forward approach in the American IPA category.  I really do look forward to one day visiting this brewery and restaurant. The places look cool enough to have a good time at. I am glad that this was my introduction to Eddyline. According to their website, this beer is their top seller. Check it out if you have the chance.

Metal Connection: Well it is only natural that the biggest Death metal band, Cannibal Corpse would make several appearances on BeerMetalDude,com. This is the third time so far that I have used a  song for the Metal Connection to the beer review. I’m sure I really don’t need to introduce these guys, but I will give you a quick run down of the band. Formed in 1988, and quickly picked up by Metal Blade Records after their only official released demo in 1989. The band also quickly gained famed after their disgusting themes and sick gore lyrics  from their first three albums went under fire all over the world, having these alums banned in several countries. The band was even banned from playing any of the songs from these songs live. This ban, was of course to stop the usage of sick lyrics, and hope to put an end to bands such as Cannibal Corpse. Instead, all this did was give them a sudden rise in fame and stardom. Actor, Jim Carrey even asked the band to be part of the movie, Ace Ventura: Pet Detective. Here is a very funny deleted scene that should have made it into the movie, in my opinion. This song for the Metal Connection is called “Intestinal Crank” from the band’s 12th studio full length album, Torture, which was released in 2012.