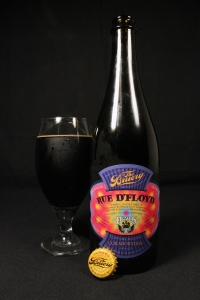 Here we are with part 2 of the gross mutant twin beer collaboration between California’s The Bruery and Indiana’s 3 Floyds Brewing Company. The first one being Floyd D’Rue, of course. This beer is a 14.4% Imperial Stout which was aged in bourbon barrels for one year. Prior to bottling this beer, vanilla beans, coffee from Portola Coffee Lab, cacao nibs from TCHO, and cherries were added. Both beers were over the top, as expected, but this one right here was definitely my favorite of the two.

Another shout out and huge thanks goes to my fellow beer blogger and good friend, Jorge Espinoza of Brewerianimelogs, who is a member of The Bruery’s Reserve Society, without so, this beer would not have been on this site. Cheers my friend! Check out his site for awesome beer reviews and Anime pairings!

I used an American pokal glass for this session. Rue D’Floyd poured an opaque, deep black coffee-like color topped with a thin  dark tan head. No retention at all on the head, as it quickly disappeared, leaving no lacing down the glass. I do see this a lot with big beers such as this, though, but not in every case.

The aroma of this beast is full of chocolate, cherries, vanilla, and bourbon. Imagine bourbon soaked chocolate covered cherries here. The vanilla is a nice touch as well. Of course, like all bourbon barrel aged beers, there is a strong presence of toasted coconut, and oak wood on the nose, as well. Coming in at the tail end of the whiff is a good scent of coffee, adding more to the complexity of the aroma on this beer.

The taste has all the same characters as the nose. Unlike the aroma though, the bourbon, and high alcohol are more dominant. A strong oak wood and toasted coconut flavor hits my palate next, which honestly is one of my favorite profiles on a bourbon barrel aged beer. Hidden this time, behind the strong alcohol and barrel flavors, are the added characters of chocolate, vanilla, cherries, and a very subtle coffee flavor. The lingering aftertaste reminds me of what a dark cherry flavored bourbon would be like.

This beer has a full body, with little to no carbonation present. The mouthfeel is surprisingly soft, and smooth for such a big beer. There is a nice heat to this beer due to the alcohol, but it adds a good dimension to the smooth, overall mouthfeel.

Overall, as I said before, of the two gross mutant twin beers in this collaboration duo between The Bruery and 3 Floyds Brewing Company, this one is my favorite. I mean, Floyd D’Rue was also an amazing beer, but this one right there just did it for me. On a visual side note of these two beers, this one also wins for better label. I love the colors used on this one. At a quick glance, this label looks like it was colored by a psychotic, evil clown (yes like Twisty the Clown on American Horror Story).

I know when my good friend Jorge sent me these two bottles, he told me there is a very soon expiration date from the time I received them, so i had to drink these right away, which I did. I did some reading on these beers and it turns out that the quality control team at The Bruery found lactobacillus in these beers. This bacteria is usually intentionally placed in a beer to help make the beer sour, but in this case, this was not done intentionally, and these beers were not meant to be sour. I am glad I followed instructions and drank them when I did, as mine were not infected at all. You can read more about it here. Interesting stuff, and of course, there are those who are upset that these guys released a beer that is known to be non-intentionally infected. 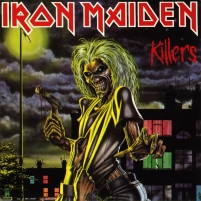 Metal Connection: On the previous review of Floyd D’Rue, the other half of this collaboration, I included a cover version of an old classic song from one of the best bands, hands down, Iron Maiden! Since this one, in my opinion, is the better of the two beers, I have included the original version of the song, “Murders in the Rue Morgue” from the band’s second full length album, Killers, which was released back in 1981. This was the last album to feature the first famed vocalist of the band, Paul Di’Anno. The band then hired the very famous voice of the band most of their still going career, Bruce Dickinson, who appeared on the very next full length album The Number of the Beast, which was released the following year in 1982.