Around here, Abita Brewing is pretty popular, and considered to be “not so craft” by the beer snobs around these parts. A lot has to do with their one beer, Purple Haze, which is a pretty popular beer and seen at random bars that normally don’t carry craft, so they get lumped together with the macros that these bars sell. I remember once, back when I was fronting my Death Metal band, I was having a bad night, and I was a bit tired on stage, and a friend of mine thought I was acting “like a little bitch.” He then decided to bring me a beer, which just so happened to be an Abita Purple Haze, cause he said a “a bitch deserves a bitch drink.” While not my favorite Abita beer, I drank it and thanked him for not buying me a Budweiser or the like!

Anyway, this review isn’t about Purple Haze, so sorry that I went off on that story there. Back on focus here. Turbodog began as a specialty beer for the brewery, but gained such a huge following and has become one of Abita’s flagship year round beers. I remember first drinking Turbodog many years ago, and rather enjoying it, but for some reason, I never drank this beer again until recently after I started this website. I am glad I went back to this beer, so I could remember the early days of me getting into craft beer.

I used a Fredericksburg Brewing Company pint glass for this session. Still gotta give love to the local breweries, even when reviewing an out of state beer! Turbodog poured a dark caramel color, similar to a dark soda like Coke or Dr. Pepper. The beer was topped with a 3/4 of an inch khaki colored head. Good head retention, as it never really went away throughout drinking this beer. Nice web-like rings of lacing made around the glass on it’s way down.

In the nose, I was able to pick up a great mixture of sweet milk chocolate, cocoa powder, light coffee, a toffee-like aroma, a bit of caramel, and roasted malts.

The flavor of the beer is very similar to the aroma. All of the same characters are present. There is a strong sweet milk chocolate and cocoa powder flavor. A nice body of caramel, toffee, and roasted malts. There is a lingering aftertaste of mild coffee, and the roasted malts. I could not pick a strong hop profile due to this combo of dark flavors that are pretty rich and dominant in this beer, but there is a mild bitterness, and earthy character mixed in well. Definitely more profound in the aftertaste, and mouthfeel.

The body of Turbodog is not very thick, so it is a fairly easy chugging beer. We all have to be careful with beers like this, though. I know it’s not a high ABV, but this shit could creep on ya! There is moderate carbonation, and a smooth and silky mouthfeel.

I really do like Turbodog. This was my first introduction to Abita Brewing, and as I stated earlier, I hadn’t revisited this beer in quite some time. I was really glad I did so. I do look forward to drinking another bottle of this, so I think I will check my local stores to see if I cold just pick up a single 12oz. bottle, rather than a whole 6 pack. Just remember this though everybody… form your own opinion on this beer. Don’t just hate it cause it’s the cool thing to do. If you don’t like it, then you don’t like it, but I guarantee you will not think it;s as bad as some may think. Give it a shot! 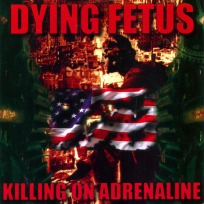 Metal Connection: As mentioned about the beer, Abita gets a bad rep cause of the masses of beer snobs who push them to the side, I figured this is an appropriate song for the Metal Connection. I mean, it does actually have the word “dog” in the title. I have always been a fan of the band Dying Fetus from Maryland. John Gallagher has an amazing Death Metal voice, and I love the groove that the band always lays down on most of their tracks, if not all. I know they aren’t for everyone, and I’m sure I will hear shit from my patches on vest Metal friends, but that’s OK. When Dying Fetus released their 1998 sophomore full length, Killing on Adrenaline, Death Metal was reaching new heights. The genre was being heard by people outside of the Underground music scene. A lot of mainstream music fans weren’t understanding the style, and bashed it left and right. The title of this song, “Kill your Mother/Rape your Dog” was a statement usually used when mainstream kids or uptight parents would describe Death Metal. It was like “…that damned Kill your mother/rape your dog music!” Dying Fetus decided to make a quick little tune with this title, and have lyrics describing their hatred for the mainstream, which they have discussed on other tracks throughout their still active career. As you can see, mainstream society hates on things before ever knowing what is really behind the product/band/music/etc…

Kill your mother and rape your dog
Kill, kill, kill, kill
Fuck these corporations and their fucking record stores
Kill, kill, kill, kill
I don’t want my fucking paycheck feeding money whores [2x]
These fuckers flood the market with their fabricated shit
And laugh as this pathetic fucking music gets them rich