Here we have a standard India Pale Ale by California’s Almanac Beer Company, who is known for their rare or series of whales, in their Farm to Barrel Series. At least down here in TX, where Almanac does not distribute to. Their beers have to traded for or hauled down here. I am lucky enough to have an awesome friend in Jorge Espinoza of animebeers.com, who helped get this beer to me.

I really like the label on this beer. The white lettering on the green label really pop out. Speaking of the letters, I love the font used, as they really remind me of a band logo, maybe one for a Power Metal or Folk Metal band or something similar. it is really eye catching.

I poured the beer into a specially designed glass for IPA’s. The beer was hazy, bright and a crisp looking golden orange color. The beer was topped with a large foamy 2 inch head. The head remained large and in tact most of the session, and left a fantastic thin layer blanket of lacing down the sides of the glass.

This IPA was full of hop aroma. Grassy, piney, and earthy hop scents filled my nose first and foremost. There as a nice character of some orange and lemon peel and a small amount of resinous funk, but that was mostly towards the end as the crisper aromas faded. I picked up a nice whiff of grains and pale malts, and some fresh baked biscuits.

The taste definitely follows the nose, and there is no mistake that this is a West Coast style IPA. There is a strong hop profile that its the palate right away. Just as the aroma, the flavor has grassy, piney, floral, and some earthy hops. There is a nice punch of citrus, with some flavors of orange and lemon peel. There was a good grain and pale malt backbone, and a big taste of fresh baked biscuits. There is a lingering citrus taste after each swill.

This IPA by Almanac Beer Company has a slightly over medium body, with a big and chewy mouthfeel, and moderate carbonation. This one has a dry finish which works very well with the citrus aftertaste.

Overall, I will say that I was very happy to have received this beer from California. I had actualy chosen another beer at first, but was told that the original beer I ordered was sold out, so this one was put in the box as a replacement, What a Hell of a replacement! As i said earlier, the Farm to Barrel Series from Almanac are the ones people around my parts go crazy for, and I would love to get my hands on some of them, I was also very pleased with this IPA, and I know that these guys can produce great product all around. Cheers to Almanac Beer Company! 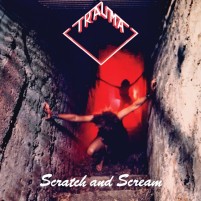 Metal Connection: As no bands or songs were found using Almanac as a key word, or India Pale Ale for that matter, I went with the next best option. I chose a classic Bay Area Thrash Metal band, Trauma from San Francisco, CA. The style of Trauma can best be described as a cross between Power and Speed Metal. The song chosen here is “The Day all Hell Broke Loose,” from their 1984 debut full length album, Scratch and Scream which was released on Shrapnel Records back then, then a re-issue in 2013. Originally the band was around from 1981-1985, then reforming in 2013 as support for their reissue of their classic and only full length album the ever put out. They have since stayed together and released a second full length album, Rapture and Wrath, earlier this year. Trauma is notable for being Cliff Burton’s band before joining Metallica in 1983. He only recorded on the band’s first demo in 1982. Enjoy some serious kick ass  Bay Area Thrash Metal!