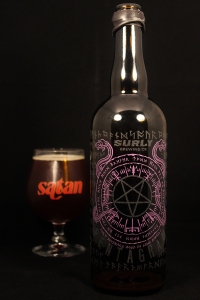 Here we have another one of those beers that inspired me to create this website. With this website, I had hoped that one day I would be able to get such Metal inspired beers like Surly’s Pentagram, and put a review up, pairing it with an awesome Metal tune. Well, that day has come! A huge thanks goes to my fellow beer blogging buddy, Jorge Espinoza of animebeers.com for helping this beer get to my hands.

Of course, I used my Satan beer snifter glass for this session, as I felt it was pretty appropriate. Pentagram poured a hazy mahogany color topped with a small 1/4 of an inch light khaki colored head, which quickly disappeared, leaving no lacing down the glass.

The Brettanomyces was strong in the aroma of this beer, with it’s unmistakable scent of earthy, barnyard funk. I was able to pick up on scents of tart cherries, grapes, red wine, figs, a little caramel, oak wood, and a little white bread in the background. The aroma was pretty complex and satisfying.

The taste of Pentagram was similar to the nose. Right up front was the flavor profile of the Brettanomyces earthy, barnyard funk. Characters of red wine, and oak wood quickly followed the Brett taste. Dark tart cherries, figs, a little bit of caramel, and white bread made up the body of the taste of this beer. The aftertaste was red wine, and dark cherries, with a lingering barnyard funk.

The thickness of the beer’s body was medium-heavy. The mouthfeel was slick, and oily with a nice jaw hurting sour bite. There was low carbonation. This beer left a velvety mouth coating feeling in the finish, which worked perfectly with the red wine and cherry aftertaste.

Overall, I gave this beer the highest rating of 5 out of 5, due to the overall flavor, and presentation of this beer. It did it’s trick and tracked me in, and delivered with an outstanding product within the bottle. This particular bottle was the 2014 vintage, and it was aged a bit, as I drank this bottle towards the end of 2015. I’m sure getting a fresher version would be a bit different, but I rather enjoyed the mellowed flavors of an aged version.

Maybe it’s the Metalhead inside me, but I find it rather entertaining when I see a “normie” or normal non-Metalhead person drink a beer like this. I really wanted this bottle for my collection for obvious reasons, as it fits my lifestyle. I always wonder what goes through a “normie’s” head when they drink a beer with such an evil looking label. It’s like a hip hop, or country music loving mother fucker, jamming out to Deicide for the first time. It’s great to see their reactions to the lyrics.

Metal Connection: I really could have gone with another song here, as there are one million and one songs with evil content and pentagram in the name, but I think I chose a very fitting song. In 1971, a Doom Metal band was formed in Washington, D.C., who would be later be known as Pentagram. In 1985, a self titled album would be released, which was actually the demo recording, All your Sins, which was released in 1982 when the band was known as Death Row. Later, in 1993, Peaceville Records reissued the album under the name, Relentless. This album is where the song I chose comes from. The song is called “Sign of the Wolf (Pentagram).” What a heavy, evil, and perfect song to choose to pair with this evil beer. Crank this mother fucker up to 11, and enjoy a tasty American Wild Ale with a 6.66% ABV.